Social Media in the "Stone Age," Part I 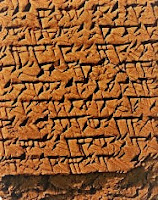 Social media seek to keep people "connected." We forget, of course, that social media have been around for a very, very long time. Before the magic of computers and the internet gave us the power of sharing "instant" words and images, we simply did the same thing in a slower and in many ways more considered and artful manner. Software and communications systems are ultimately extensions of our own human powers, and for all their external dazzle they are but imitations of the internal vitality, expressiveness, and imagination that make up our humanity.

Before Facebook and Twitter, before texting and mobile devices and instant photo sharing, before even that ancient instrument of communication used by our forefathers that still lingers in vestigial form in our homes and in our pockets--the "telephone"--there was the original marvel of all the social media, used by everyone from Hammurabi to Cyrus the Great to St. Paul to my younger self (and there are precious stacks of them still boxed away in my attic): the tremendous, glorious letter.

Other than those times when you were expecting the delivery of something you ordered online, when was the last time that you actually looked forward with anticipation and hope for the delivery of the mail?

Once upon a time, the mailman was a magical creature, a sort of daily Santa Claus who might be bearing...anything. They say you get a little endorphin rush whenever someone "likes" your status on Facebook. But nothing electronic compares to the raptures of hope that used to fill you from head to toe every time you saw the mailman, starting about six days or so after you had sent your last letter. You tried to see if there was a letter in that pile he delivered: the ragged envelope, the familiar scrawl, the tangibility of a letter.

Obviously, I am not against the electronic media. They are tools. Too many people, however, assume that because something is a "tool," we need not give any thought to how it shapes and affects and (possibly) hinders the purposes for which we use it. Usually the more powerful a tool is, the more dangerous it is as well. And some tools have a dynamic of their own which serves us wonderfully if we give it constant attention and direction, but runs wild and ruins us if we ignore it. Nothing illustrates this better than man's mythical first "tool": fire. Today's communications media are a kind of fire. That is a subject for another blog.

I am reminiscing about the good old days of "the letter." I realize that in today's world there are people who are adults in the eyes of the law who have never had the experience of getting letters on a regular basis. Yet, I am not convinced that the handwritten letter is dead. One of the best things about getting letters was the "sign" of the other person that was expressed in their unique and unrepeatable (and often endearingly unreadable) handwriting.

Handwriting may make a surprising revival. I don't know what form it will take, but it seems too human to fall into extinction.

There is so much more to say about letters. I shall have to write a Part II.